The Lehman trilogy premieres on Broadway on October 14 after its previews at the Nederlander Theater. The show was previewed in March 2020 before the COVID-19 pandemic shut down theaters around the world.

Stefano Massini wrote The Lehman Trilogy. And Ben Power adapted it for the stage. The Lehman trilogy weaves nearly two centuries of family history. It starts with the family’s humble beginnings. Then it depicts the amazing successes and devastating failures of financial institutions. Those that will ultimately made the world economy paralyzed. After a limited release on Broadway, the show will be on the West Coast. The first stops are Los Angeles and San Francisco (April 20 to May 22).

Adrian Lester, an Olivier award winner, will make his Broadway debut in the play as Emanuel Lehman. He is replacing Ben Miles, who departed due to other project commitments. Original company members Simon Russell Beale and Adam Godley reprise their roles as Henry Lehman and Mayer Lehman, respectively.

The Lehman Trilogy is a three-act play by Italian novelist and playwright Stefano Massini, telling the story of a family and company that changed the world. Directors such as Luca Ronconi and Sam Mendes took it no stage. 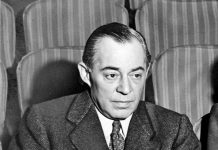