Hacker Tickets LLC – All About Upcoming Events, Things to do, Broadway Shows, Concerts and more.
Home CONCERTS The Eagles in the Madison Square Garden: A Guide!

The Eagles are once more on the dark desert highway, and it’s leading straight to the Madison Square Garden. For a two-night show full of golden rock classics!

So, if you want to hear evergreens like Hotel California and Take it Easy, then save the dates 22 and 24 of August. The two shows are part of the re-scheduled Hotel California 2020 Tour. They were initially scheduled for 2020 but had to be shifted due to the global COVID – 19 pandemic.

The band initiated the 2020 tour with the goal to commemorate their most commercially successful album – the 1976 Hotel California. The Eagles will be on the road for about two months or thirty-one total shows. The two shows in Madison Square Garden will serve as an opening to the tour. It will conclude in the Chase Center, San Francisco, on October 23.

The tour initially kicked off on February 7, 2020, at the State Farm Arena in Atlanta. But it had to be abruptly canceled because of the COVID outbreak.

The planned line-up for the tour consists of Don Henley, Joe Walsh, Timothy B. Schmit, but organizers say that this trio would be accompanied by more than 70 (!!!) other artists. Just like in their last shows, where the lineup consisted of the aforementioned trio along with Deacon Frey and Vince Gill. And alongside a 46-piece orchestra and a 22-voice choir. So, be prepared for a huge show. And not only as pure scales but also in significance. Such a star-studded cast is not to be missed!

The Eagles in Atlanta

The last show before the lockdown was at the State Farm Arena in Atlanta in February 2020. The venue was fresh off some heavy renovations and had just recently been voted the best new concert venue.

The show in Atlanta, along with the three pre-tour gigs in Las Vegas were met with high acclaim from both fans and critics.

The Las Vegas shows got high acclaim, too, especially the first out of the three nights.

Ticketmaster distributes the tickets on the primary market. Passes for both evenings of The Eagles in the Madison Square Garden are still plentiful, but you’d better hurry.

The two concerts of the Eagles in the Madison Square Garden might be a month away from now, but have in mind that the interest is high tickets in some sections are nearly depleted, especially for the first of the two nights. I advise you to hurry up if you’re looking for tickets in sections 105, 106, 107, as well as the sections around the mixing area (1-3).

Nothing new on the secondary market – all major resellers have a full inventory and tickets prices are a bit higher.

Stub Hub’s tickets start at $229 for the same tickets with a side view (including fees). They have a full inventory, providing tickets for all sections. The bulk of the tickets costs around $500, and the most expensive ones – $5494.

It’s a rather weird coincidence that this tour happens at the Eagles’ 50 years anniversary. Half a century, this is just stunning! During this time they have achieved quite a lot – five number-one singles and six number-one albums, six Grammy Awards, and five American Music Awards. Hotel California, Take It Easy, and New Kid in Town are iconic and will be loved forever! I already bought my ticket for the first night of the Eagles in the Madison Square Garden. And you’d better hurry up!

The old rock dinosaurs are on the move! Guns N’ Roses announce their tour! 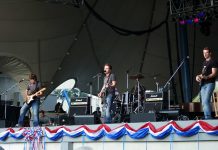 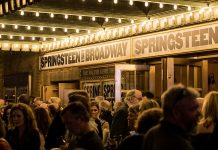 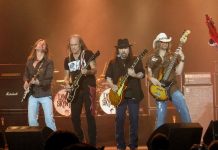 How to Buy Tickets for Springsteen on Broadway!